Winter vacations in another country is the best thing that you can give to your family as a Christmas present. Grown-ups will get some rest from their everyday routine; kids will enjoy new discoveries and come back home full of emotions and impressions. And while Amsterdam might not be the first destination that comes into your mind when you think about family travel, soon you will discover that it’s of the most family-friendly cities in the world.  Even the classical Amsterdam attractions like the Rijksmuseum and the Van Gogh Museum offer plenty of entertainment for kids and grown-ups. We’ve collected some information on the best family entertainment in Amsterdam this winter, and here are our findings.

Take a ride on a Christmas tram. Various dates
Traveling by public transport around the city doesn’t sound like much fun to you? Not anymore! Because this winter the Tram Museum (Electrische Museumtramlijn Amsterdam) will again host several Christmas/ New Year's rides on their historical trams. Take a fun ride on a vintage tram that will show you the beauties of Amsterdam. The adventure starts at the Haarlemmermeerstation, then the tram goes to the Olympic stadium, past the Amsterdamse Bos and finally arrives at the station in the Amstelveen municipality. Each ride starts at 13.00. Besides, the participants are treated with hot chocolate or glühwein, a Christmas cake or traditional Dutch doughnuts called Oliebollen. If you didn’t get the chance to join a Christmas ride on 14th and 21st of December, there are still several winter rides organized in January. Check the museum site for details. Tickets cost: €10 or €12.50, depending on the tour type. 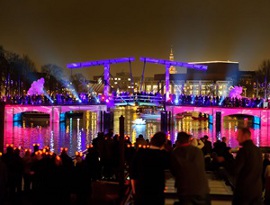 Make a tour around the marvels of Amsterdam Light Festival. Until 18 January 2015
The Amsterdam Light Festival is definitely one of the most important winter events in the city. Until mid-January, various locations around the historic centre of Amsterdam will turn into outdoor venues for light sculptures, installations and projections, created by local and international artists. The event is in its third year in 2015 and will surely impress all the members of your family. This year, the festival theme is “Bright City”, so most of the works are focused on Amsterdam’s modern image. If you want to discover all the participating masterpieces rather than peep at accidental sculptures, there are two ways to make a comprehensive tour around the festival objects. Firstly, you can take a boat tour called “Water Colours” that is offered by several boat companies. Alternatively, take part in a guided walking tour “Illuminade”. You can find all the necessary information at the festival heart located at Amstel 27.

Hotels near the Amsterdam Light Festival heart and kiosk:

Pick free tulips on the National Tulip Day. 17 January 2015. Dam Square
The National Tulip Day is a sort of a warming up for a blooming spring season. But most importantly, it’s a good reason to drive away that winter depression and remember that spring is just around the corner (even if it’s just the middle of January). On the day, stalls with almost 200 thousand tulips will be placed on the city’s most important square, the Dam. Don’t be shy, take a flower for free! Cause this is the event’s main goal. Organized by the national tulip growers, it also officially launches the Dutch tulip season that will last until the end of April. So if you’re inspired by the beauty of the flower, come back to the Netherlands in the end of March, when the world’s most beautiful garden, Keukenhof, opens. Your children will get much fun making flower bouquets and choosing the flowers they like the most.

Skating fun at the ice skating rinks. The Museumplein, the Leidseplein and other locations
Ice skating is one of the most popular ways to get a taste of European winter traditions, and Amsterdam offers lots of opportunities for that. Ice skating rinks are installed at various venues around the city, and the two most important ones are the Museumplein and the Leidseplein. Set right in the heart of Amsterdam, they offer great opportunities to check your stamina and skating skills, enjoy some of the most beautiful views in town and savour traditional treats, including the famous Dutch pancakes. Needless to say, ice-skating will bring many good impressions to all the members of your family, even if it’s their first time. Another skating rink, the biggest one in Amsterdam, is found at the Jaap Eden complex. And, finally, you can join the locals and skate right down the canals, if the weather conditions are favourable!

Your hotel activities
If you’re visiting Amsterdam during the festive season, it’s most likely that you and your whole family will be offered lots of entertainment right at your hotel. The best Amsterdam hotels provide family travelers with various ideas for perfect holidays: festive dinners and parties, special events like treasure hunts and cooking classes, discounts and presents for little guests… Check your hotel’s event programme if you want to be sure they’ve got something for your kids. So far, here are our findings:

-          Andaz Amsterdam Prinsengracht 5* organizes cookie workshops for the little ones and a Tacky Christmas party for the whole family. Didn’t get the chance to participate in these? Enjoy special sweet treats at the hotel’s bar and Sunday Brunches at the Bluespoon restaurant instead

-          Sofitel Legend the Grand 5* will offer special festive menus for kids throughout December. We’re quite certain there are more culinary offers waiting for little guests during other winter months

More entertainment throughout the year 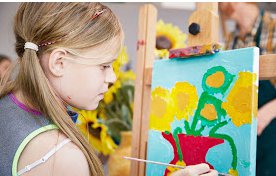 Kids’ activities at the Van Gogh Museum. Paulus Potterstraat 7
Who said that a museum visit is interesting for grown-ups only? The best way to explain your kids what the Dutch culture is about is to take them to one of the most famous local museums. This might also be the right step if you want to rouse their interest in classical art. There are numerous kids-oriented activities offered at the Van Gogh Museum. Painting classes, treasure hunts based on the artist’s heritage and other activities for little creators will tell them about art in a way they understand it. The workshops are available in English. Most of them are free; the painting workshops cost €7.50 per child, with free museum entry.

The secrets of nature revealed at the NEMO Science Centre. Oosterdok 2
The NEMO Science centre is the most important science museum in Amsterdam. Besides, it is fully oriented at young explorers and future scientists. Here, on the five floors of the museum building, they will learn how the universe works, carry out experiments in a laboratory, discover the laws of physics and even become logistics experts. The exposition is divided into themed sections, each is thrilling and educational. But the most important thing is that your kids will learn about physics not just in theory, but in practice. You’ll probably even have to visit the country’s fifth most popular museum several times.

Meet the world animals at the Artis Royal Zoo. Plantage Kerklaan 38-40
A visit to the Artis Royal Zoo, the oldest zoo in the whole country, will educate your kids about the diversity of animal species that inhabit our planet. And there is indeed something to discover, for the zoo boasts 900 animal and 200 plant species, plus an Aquarium, a Butterfly Garden and even a Planetarium. In fact, it seems there’s nothing you won’t find here. Instead of just loafing around the zoo, why not participate in guided tours or zookeeper talks dedicated to certain animal species? The talks are, unfortunately, held only in Dutch, but you can ask questions in English as well. The guided tours are available in English. 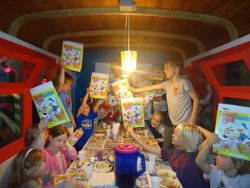 Blowing your steam off at the TunFun playground. Mr. Visserplein 7
Movement is something kids need as a breathe of air. So let them do what they want! After all those lectures, workshops and educational programmmes, it’s so good to finally have some fun at the soft and safe playgrounds of The TunFun. The centre provides indoor playgrounds divided into age-specific sections. Kids aged 1 – 12 are welcome to jump, crawl, slide, fall and get crazy as much as they want to. The list of entertainment sections includes a skatekart, trampolines, a blackbox, jungle gyms and pools for tiny tots. There is also a Mini Theater that organizes book readings every Tuesday and Thursday, a café and some facilities for grown-ups like free WiFi.