The Netherlands is a beautiful and colourful country which does not end in Amsterdam only. Delft, known for its charming porcelain, the sedating pier at the Hague, tulip fields in Lisse, the port at Rotterdam… All these things are definitely worth seeing. However, you are most likely to start and finish your Dutch adventure in Amsterdam. How do you travel around the country from Amsterdam? What areas in Amsterdam are best to stay at between your travels? It all depends on the means of transport you choose.

Most people traveling to Amsterdam arrive at Schiphol International Airport, the main international airport of the Netherlands, located 18 km (around 20 minutes’ ride) southwest of the city centre. If you go to other country, choose a plane. However, there is no need to travel around the Netherlands by air as all the cities are easily reachable by land transport.

If you want to get to other Dutch cities, you can take a train from the railway station which is located directly underneath the passenger terminal at Schiphol. Trains go to Amsterdam Centraal station (ticket cost around €3.90), Rotterdam, the Hague, Leiden, Utrecht and many other cities in the Netherlands. You can also take a bus from Schiphol Plaza. By the way, your acquaintance with the Dutch culture can start directly at the airport, as there is the annex of the Rijksmuseum found on its territory.

To get to a hotel close to the centre of Amsterdam, use the Connexxion shuttle bus line which links the airport with a great number of city hotels. Single ticket will cost you around €16.50. But if you need just a layover before traveling somewhere far, there are many hotels located close to the airport that offer free airport shuttle. 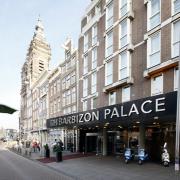 As said before, Schiphol airport has a railway connection with Amsterdam’s Centraal Station. Accommodation by the station is, in fact, the perfect variant for those who want to see both Amsterdam and the rest of the country. The station stands directly in the city centre, some minutes’ walk from the Dam Square, the National Monument and the famous Red Light District. Amsterdam’s metro lines 51, 53 and 54 also start here. Trains go both to national and international destinations. And since this is the centre of the city, there are lots of high-end and budget hotels to choose from.

Hotels next to the Centraal Station:

Intercity bus travel isn't popular in the Netherlands. Locals usually use trains to get to other cities while buses are used to reach the suburbs.

There are, however, buses going to Haarlem, Vijfhuizen, Hoofddorp and some other cities from Schiphol airport (Schiphol Sternet, Zuidtangent and Interliner bus lines). Check the "Plane" section for hotels near the Schiphol airport.

If you want to travel to another country by bus, you can use Eurolines. Eurolines buses stop at the Amstelstation, located to the south from the city centre. Your way to the Centraal Station from the Amstelstation will take only 15 minutes.

Hotels close to the Amstelstation:

If you head to Amsterdam by car, there is one thing you must keep in mind. Like most European capital cities, Amsterdam has one problem – the lack of parking spaces in the city centre. We mean the spaces that won’t cost you a fortune. So if you want to save your money, we advise leaving your car at one of the Park + Ride car parks in the more remote city districts and continue your travel around Amsterdam by public transport. Parking with Park + Ride will cost you only €8 per 24 hours.

Some hotels in the suburbs and in the centre have their own parking spaces. The ones in the historic centre of Amsterdam are more expensive, of course. The suburban ones may even offer  parking for free.

Amsterdam hotels with their own parking:

If you want to hire a car to travel around the country, you can use one of the many local and international companies, including Avis Autoverhuur, National Car Rental, Europcar or Hertz. You can also rent a car at Schiphol airport. 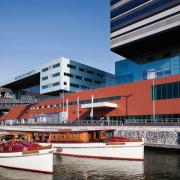 A short ferry voyage is the best way to discover the naval soul of Amsterdam. But of course, the number of destinations you can go to is limited. You can take a fast flying ferry to the towns of IJmuiden and Velsen (the return ticket will cost you approx. €8.60). The ferry departures from the Centraal Station, therefore, if you need a hotel close to this point, check the “Train” section.

The Port of Amsterdam, located by the IJ Bay, is the second largest port in the Netherlands. Those arriving to Amsterdam by cruise ships find themselves right in the city centre, with the Centraal Station a short way from the Passenger Terminal.

Hotels near the Port of Amsterdam: