Amsterdam is like a whole new world for a first-time visitor, and the more you discover it, the more facets it shows. But even in a diverse place like this, there are some things worth seeing in the first place. Start your first trip to Amsterdam with a visit to these most important Amsterdam attractions. Learn about the best museums, parks, markets and unusual sights in the city from our Top 10 Amsterdam attractions list.

Best and most important tourist attractions in Amsterdam 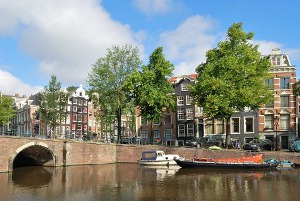 Amsterdam canals
The Amsterdam canal belt forms the city’s image of the “Venice of the North”. And indeed, a boat tour along this part of the city could make your whole trip. With a total of 165 canals that stretch more than 100 kilometers, there is truly something to wonder at! The oldest canals date back to the 17th century and are included in the World Heritage Site list: the Prinsengracht, Keizersgracht, Herengracht and Jordaan. And, luckily, these ones are located right in the historic centre. Enjoy views on the famous canal houses and some must-visit attractions like the Anne Frank House and the Westerkerk. Or even book a hotel room with a canal view.

Hotels located by the canals:

The Museumplein. The Rijksmuseum, Van Gogh Museum, Stedelijk museum
True to its name, the Museumplein, or the Museum Square, is the concentration spot for the best-known Amsterdam museums. Learn all you can about the classical Dutch art at the State Museum (Rijksmuseum). Get to know Van Gogh better at the Van Gogh Museum. And, finally, enjoy modern art that has already become classics at the Stedelijk Museum. Each of the buildings breathes its own air and impresses with unique architectural findings. If a short glance on the history of art is all you need, you don’t have to go farther than these 3 museums – they have everything you need. 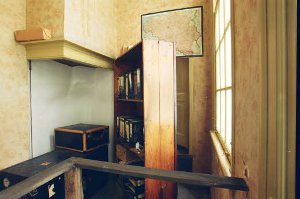 It’s surprising how a museum this small gathers crowds of tourists every day. Be prepared to queue to reach the small chambers of the Anne Frank House – the diarist’s last refugee before she and her family were sent to a concentration camp. The Franks had to hide from the Nazis in the Secret Annex of the house, located behind a bookcase. Observe that very bookcase, Anne’s diary and other informative exhibits in the museum, which itself hides from demolition within a modern superstructure. There is also a bookstore and a café found in the museum.

Hotels near the Anne Frank House:

Dam Square
Even if you’re drawn to Amsterdam by its rebellious spirit, don’t avoid the Dam, for it’s the true heart of the city. Its monuments will tell you a thing or two about the history of the country. Look at the National Monument that commemorates those who fell during the World Wars, marvel at the stateness of the Royal Palace – a former city hall, feel the chilling moods of the gothic Nieuwe Kerk. And, finally, compare originals to their likenesses at the Madame Tussaud’s Wax museum. At any time of the year, Dam Square is also the starting point for many important events, including the National Remembrance Day, Christmas Day, King’s Day and the National Tulip Day. 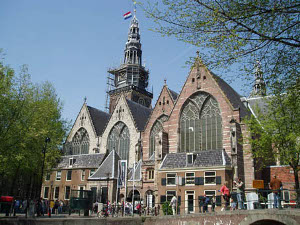 The Kerks of Amsterdam
Even if you are not a big fan of religious sites, we guarantee that you’ll be captivated with the stunning architectural looks of one of the oldest Amsterdam churches, or kerks. Those are: Oude Kerk (“The Old Church”), Nieuwe Kerk (“The New Church”) and Westerkerk (“The Western Church”). All three are Protestant, but their looks are far from similar. The older one, Oude Kerk, dates back to the 13th century and reminds us that even the ambiguous Red Light District has some attractions well worth a cultural visit. The beautiful gothic Nieuwe Kerk, set right behind the Royal Palace, is known to be the place for the royal investiture ceremonies. The youngest one, Westerkerk, is located in the fashionable Jordaan district and is the largest Protestant church in the whole country. It’s also found minutes from the Anne Frank House.

Hotels near the Oude Kerk:

Het Scheepvaartmuseum. The National Maritime Museum.  Kattenburgerplein 1
The Maritime Museum tells the story of the Dutch thirst for adventures and the powers that it had on water. It’s also a must if you’re visiting Amsterdam with your son: his dreams of sailing will partly come true here. Scale ship models, weapons, maps, paintings, navigational instruments, ship decorations and multimedia shows are all there to introduce you to the world of sailing, shipbuilding and Dutch naval history. But the central museum attraction is located just outside the Scheepvaartmuseum, at the quay. It’s the replica of the 18th century ship Amsterdam that sailed to the East Indies.

The Vondelpark
For the ones sick of all those crowds and buildings, there are numerous green spaces found in Amsterdam. And the largest one is the Vondelpark. Found minutes from the Museumplein, it’s a perfect spot for your respite from sightseeing, a picnic with family, a bike or a roller skates ride, and even some cultural findings. Named after a famous Dutch poet Joost van del Vondel, the park boasts its own collection of sculptures, including one by Pablo Picasso, an open air theatre, a rose garden, playgrounds, a modernist tearoom and more. During the warm summer days, it gathers crowds to its open-air theatre performances, markets and other events. 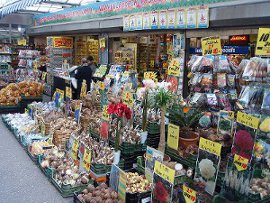 The floating Flower Market at the Singel
Years and years after the tulip craze is over, the flower remains to be the symbol of the Netherlands. The tulip season finishes in May, but you can still buy beautiful flowers at the country’s most famous flower market – the floating flower market at the Singel canal. The unusual thing about it is that the stalls stand on barges – a hint to the times when flowers were brought to the Netherlands by ships. Not only tulips, but a massive choice of other flower species can be found at the market. In winter, it becomes a Mecca for everyone looking for a lush fragrant Christmas tree. The market is open from 9.30 till 17.30 on workdays and from 11.00 till 17.30 on Sundays.

Hotels near the Flower Market:

De Wallen – the Red Light District
The Red Light District is not the first and most important thing to see in Amsterdam, but most of you will end up there anyway. So it’s good to know that there are in fact several red light districts in the city. The largest one is De Wallen, located right in Amsterdam centre. Apart from brothels, strip clubs, sex shops and red-lit cabins, the area boasts charming historic houses and one of the most important religious attractions of Amsterdam – the Oude Kerk. As for the “themed” attractions, the best known of those is the monument to sex workers – Belle. Visit the Prostitution Information Centre to learn the rules of the game, or consult our guide to the Red Light District.

Hotels in and near the Red Light District:

Coffee shops
It’s hard to tell what people mainly come to Amsterdam for: its classical attractions or the “forbidden” ones. But it’s quite certain that coffee shops remain to be some of the best-visited establishments in the city. Well, if you’ve decided to taste the forbidden fruit, a coffee shop is by all means the best place to do that. Before you visit, check that the chosen coffee shop has a license. And don’t be shy to ask for an advice. Also note that they don’t sell weed to visitors under 18. There are numerous coffee shops found in Amsterdam – you can easily recognize them by their facades and the typical smell coming from the inside. One of the most famous shops is probably the Bulldog Palace on the Leidseplein. The company also owns a hostel in the Red Light District.

Hotels near the Bulldog Palace: