Things You Need to Know About the Red Light District

Things You Need to Know About the Red Light District 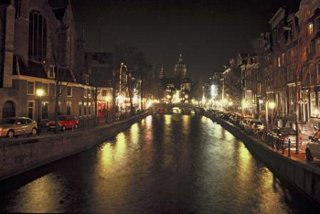 Let’s admit it: most people that head to Amsterdam for the first time, or at least the younger ones, visit the city with two things in mind: the Red Light District and pot.

The Red Light District, or Rossebuurt, as the locals call it, has played a significant role in the city’s image, both in positive and negative aspects. However that may be, you cannot avoid the area when in Amsterdam. You just have to see it.

But before you pay a visit to the Red Light District, you may want to get prepared for the occasion. Here are some answers to the most frequently asked questions.

Where is it found?

There are in fact three Red Light Districts in Amsterdam: the one in the Singel area, de Pijp (that’s next to the Rijksmuseum) and De Wallen, between the Centraal Station and the Nieuwenmarkt. The latter is the oldest, the most popular and the most central one. Yes, the Red Light District is located right in the city centre, a few steps from the Centraal Station. So getting there is not a big problem. Just get out of your train or take a shuttle bus/ taxi to the central Amsterdam area. The city’s main attractions, prestigious hotels, restaurants and shops are all in an easy walking distance.

De Wallen is an area with history. It’s been the central point for prostitution since the 15th century, or even earlier, mostly due to its location next to the harbor. The district has seen many changes and misfortunes, for they banned prostitution and then lifted the ban (for example, during the Napoleonic period). One thing has remained unchanged: the feel of the area.

In fact, De Wallen is worth visiting not only at night, when it glows with the red lights, but also at daytime, because it appears to be one of the most charming historic areas in the city. The atmosphere is typically “Amsterdam-like”: old quaint houses with intricate architecture, narrow cobblestone streets… There are even some attractions to show: the “Nautical Quarter” Zeedijk with its Chinatown and a Buddhist Temple, the Jewish Quarter, the Oude Kerk and the Nieuwmarkt square. The bronze statue of a prostitute, “Belle”, stands in front of the Oude Kerk and is probably the only monument to honour prostitution in the world. The inscription says: “Respect sex workers all over the world” 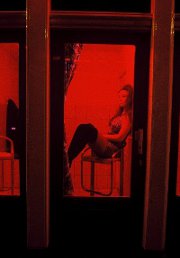 But the most popular part of the district is, of course, the one with the red-lit cabins occupied by women who offer their sex services. There are also brothels, peep shows, sex shops, a condom shop and a sex museum to meet the needs of sex tourism. Coffee shops and nightclubs also form a significant part of the area’s business. There is even a hemp museum found here.

Got lost or don’t know what to start with? A visit to the Prostitution Information Centre at Enge Kerksteeg 3 might be a reasonable solution.

So, you’ve decided to taste the forbidden fruit, or just have a look at what all the fuss is about. But is it legal at all?

Prostitution is legal is the Netherlands since 2000. Why did they legalize it? To make the business easier to control and to prevent criminal activities. But you must remember that not all the forms of prostitution are legal.

Firstly, all brothels, window services (the red-lit windows you see from the streets), escort services and private houses must have licenses. Make sure the place you’re heading to is licensed.

Street prostitution and massage parlours offering sex services are illegal. As for home prostitution, it does not require a license if it’s just a one-person activity and not an organized business. By the way, sex workers are even paying taxes since 2011.

Sex workers don’t need a work permission but are required to have a registration pass with a special registration number and a photo (no personal data). They also must be no younger than 21 (this minimum legal age was raised from 18 to 21 in 2013).

Prostitutes aren’t required to pass health checks, but many brothels want them to. At the same time, the government strives to provide them with access to all the medical care services and ensure they work in appropriate conditions.

Even though you might have thought everything is allowed, there are in fact some very strict rules (and some strong advice) to follow while in the Red Light District.

1.      No photographing! Never ever! This is strictly banned, or you might be thrown out by the women’s bodyguards (yes, many of them have bodyguards)

2.      Beware of pickpockets. Although the area is pretty safe, its overall reputation attracts many creepy creatures. Mind your personal belongings.

3.      Better not go there alone, especially for the first time. The reason is the same – pickpockets and other suspicious visitors.

4.      Always remember about safety. Use condoms.

5.      Have some respect for the people who live there. Try not to be too noisy.

6.      The blue lights above the doors mean transsexual services.

7.      Don’t buy stuff from dealers. Meaning, any stuff! Troubles guaranteed. If someone offers you “Charlie” – they offer you hard drugs, which are illegal. Want to smoke weed? Go to a coffeeshop. 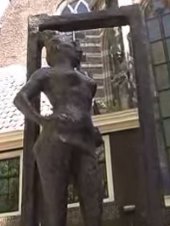 Tours around the Red Light District

If you’re worried about your safety or simply want your visit to be educational, why not take part in a guided tour around the Red Light District? These are offered by numerous companies, including Amsterdam City Tours, Sandeman tours, Randy Roy’s Redlight tours and others.

A standard Red Light tour includes a guided visit to the district, including the red light cabins, sex shops, Prostitution Information Centre, Sex Museum, a monument by the Oude Kerk and drinks in local bars. Check the details at tour companies’ sites and choose a tour you like the most.

Accommodation in and near the Red Light District
As said before, the district occupies the central Amsterdam area, so finding accommodation close-by, or right in De Wallen, is not a big problem. Central accommodation isn’t quite suitable for those who prefer privacy and calm atmosphere, but if you want to be in the centre of action – the right choice you’ve made!

You aren’t likely to find a luxury hotel right in the Red Light District. But these are found in abundance just some steps from the area, in the direction of the Dam Square.

At the same time, there are some decent hostels/ inexpensive hotels found right in the Red Lights. So if you’re young, boisterous and searching for a good company (or coming to Amsterdam with yours), this is quite a good choice.