Where to mingle with the locals in Amsterdam

Where to mingle with the locals in Amsterdam

The Rijksmuseum, the Van Gogh Museum, the Dam Square, Westerkerk… all the major touristic attractions of Amsterdam indeed reveal the artistic and historic past of the city. However, they don’t give you a sufficient understanding of how the locals live. And if you want to see the city with the Amsterdamers’ eyes, you must visit the spots that they visit. Where can you mingle with the locals in Amsterdam? Here are some of our ideas.

Chill out at the brown cafes 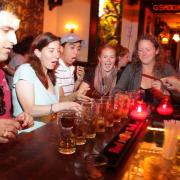 What do the young (and not very young) people do when their workweek finishes? Some have rest at home, but many, especially the students, prefer to relax at bars and pubs. The Dutch beer is known all around the world, so if you want to get acquainted with local traditions and have a good drink, we advise going to traditional brown cafes – the pubs with cozy wooden interiors, relaxing atmosphere and a good choice of alcoholic drinks.

There are many brown cafes and traditional bars in Amsterdam, so it’s really hard to name the best ones. The most budget spots are concentrated in and near the Red Light District whereas the most high-end ones are found at the Jordaan. The ones we can recommend you are Café t’Monumentje (Jordaan), the Casablanca karaoke bar (by the Red Lights) and Café De Doffer (in the Nine Streets area). Winston hotel/hostel has a cool bar that provides discounts to the hotel guests.

Hotels by the Jordaan:
- Pulitzer 5*

A night of fun at local clubs
Amsterdam has a rich clubbing scene, so if you are young, full of energy and desire to communicate with someone who likes to have fun, you’re welcome! There are two major nightclub areas in the city: the Leidseplein and the Rembrandtplein. The first one hosts the giants of the nightclub scene – the Melkweg, Paradiso and the Sugar Factory, along with a number of nice bars. The Rembrandtplein’s most famous clubs are Escape and Club Rain, whereas the more relaxed and casual ones are Studio 80 and Club Smokey. The latter are very popular with students. But note that hotels in the area don’t guarantee you a good night’s sleep.

Compete with the Amsterdamers in bargain-hunting
We all need to do some shopping sometimes. As a European capital, Amsterdam offers you plenty of opportunities to buy some designer stuff at local boutiques or shop for more authentic things at the flea markets. Both variants are great to learn what the local fashonistas prefer to buy. The most popular shopping areas are The Nine Streets (de 9 Straatjes), with plenty of stores of all types, the Leidsestraat and the Kalverstraat, a home to the famous international brands.

By the Leidsestraat:
- Dikker and Thijs Fenice Hotel 4*

The famous Albert Cuyp market is the best place to shop for local food, flowers, cosmetics and other things at cheap prices. The market is situated in the popular De Pijp neighbourhood, the Quartier Latin of Amsterdam, populated by people of over 150 nationalities. So there’s always something to see and buy in the area.

A picnic at the Vondelpark (and other Amsterdam parks)
If you want to see where the Dutch families and couples spend their weekends, head to one of the numerous local parks. Start with the Vondelpark – the largest and the most scenic one. Join the locals during jogging, picnicking and doggie-walking. In summer time the park’s open-air theatre hosts concerts. There are sculptures found throughout the Vondelpark, including the ones by Pablo Picasso, so a sort of a cultural enrichment is guaranteed too. 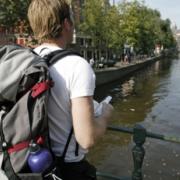 Around Amsterdam on Bike
Biking doesn’t 100% allows you to communicate with the others, but anyway, it’s a good way to see the city with the eyes of the local. Most Amsterdam citizens have bikes, and many choose it as their only means of transport. And it’s not a big surprise, considering the excellent net of bicycle paths covering around 400 kilometers of Amsterdam territory. There are plenty of companies offering bike rental services, including the MacBike, Rent-A-Bike and Yellow Bike. Rental shops are spread throughout the city. Buying the I Amsterdam card is strongly advised as some companies offer the card holders discounts on bike rental.

Where do they live in Amsterdam?
Want to get even a better insight into the life of Amsterdam citizens? Or simply tired of the crowds of tourists surrounding you? A visit to the residential Amsterdam neighbourhoods may turn into a little adventure. The up-and-coming De Baarsjes neighbourhood in the west of the city or the more central and expensive Oud-West area, the beautiful green Oost Watergraafsmeer with the famous Oosterpark… All the districts are different and full of discoveries. Spend some time studying the map of Amsterdam neighborhoods.

Staying far from the city centre isn’t very convenient if you want to see the most popular sights. On the other hand, the transport system is well developed so getting around Amsterdam is easy. There are some nice hotels found outside the city centre.

Hotels in the suburbs: