Where do I stay in Amsterdam if I want a peaceful atmosphere?

Where do I stay in Amsterdam if I want a peaceful atmosphere?

Need some good night’s sleep and quietness after a rich sightseeing day? Or maybe you just don’t like the crowds of people surrounding you, making noise and spoiling your rest. In this case, you should find a nice hotel in a peaceful location.

Even though Amsterdam has the fame of the destination for the young ones, there are many places to avoid the hustle and bustle and enjoy a quiet rest in the city. A park or a quiet street, charming canal location in the city centre or location in the suburbs... Let us give you some clues about how to choose a hotel in a quiet Amsterdam area.

Quiet location by the canal and attractions at your doorsteps

You probably wouldn’t think it, but a quiet hotel atmosphere does not necessarily mean that your place of accommodation is situated far from the city centre. Amsterdam is the city of beautiful canals that cross it far and wide. And while some central hotels are rather noisy, many of those standing by the canals can boast relative quietness combined with proximity to the main sights and stunning views. There is a number of hotels in Amsterdam located on the Herengracht, Prinsengracht and other historic canals. Let’s name some of them.

Hotels by the canals:

A few steps from the touristic areas

Sometimes you can find a perfect retreat in the place you didn’t expect to. There is life boiling in the most famous districts of Amsterdam, but step outside the area around some popular attraction – and you’ll find an oasis of calmness among the fuss of the city. Travel past the Dam, walk a little bit farther from Damrak street, step away from the crowds of Leidseplein to find the hotels that promise you a perfect rest. Travelers’ reviews will help you.

Hotels at peaceful spots close to the main attractions:

Amsterdam has a number of great parks that are perfect for leisurely strolls, picnics and week-ends with your family and friends. Vondelpark is the most popular one, but the list of Amsterdam’s green spots does not end here. There are a total of 30 parks in the city. Beatrixpark, Amsterdamse Bos, Sarphatipark, Amstelpark and Oosterpark will bring back harmony to your soul. Vondelpark is situated close to the city centre and the popular Museum District while most other parks are away from the central area, which means they are even quieter. 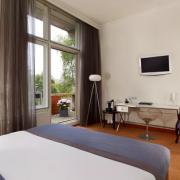 Hotels by the parks:

Hotels in the suburbs

Even though accommodation in the suburbs isn’t recommended for tourists due to remoteness from the main sights, it may be a good variant for those who need complete quietness, want to save on hotel rooms or arrive to Amsterdam by car. The advantage of such location is that the traffic outside the centre isn’t that heavy and inexpensive car parks are easily found. On the other side, there are not too many high-class hotels in these areas. For 4 and 5 star hotels, choose the area closer to the World Trade Center.

Some nice hotels outside the city centre:

Where NOT to stay if you want a quiet atmosphere

Amsterdam is the city of tolerant views, and this is the reason why it attracts young people and those who come here to party. In addition to this, there is a great number of nightclubs concentrated in some areas which we advise you to avoid. The Red Light District, the Leidse Square and the Rembrant Square are definitely not the best variants for you if you want to save your nerves and get a good night’s sleep.

Also better keep away from the main touristy areas rich with sightseeing spots and the areas around the main transport hubs. You won’t be happy with a hotel by the Centraal Station if you expect your lodging to be an “oasis of calmness”.