Best ways to organize your canal tour in Amsterdam

Best ways to organize your canal tour in Amsterdam

A quick look at Amsterdam canals

Just like the Red Light District, the floating flower market and coffee shops, the Canal Ring forms a part of Amsterdam’s image. So if you are the first time visitor, you shouldn’t miss a boat tour around the charming Amsterdam canals. It’s not only one of the best ways to get acquainted with the city and see the main sights from water, but is also just a great pastime, which, we are quite sure, is popular with tourists and locals alike. 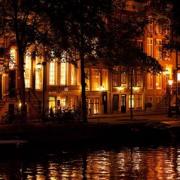 2013 is the year when every tourist must include a boat tour around the canals in his “to do” travel list: the Amsterdam Canal Ring celebrates its 400th anniversary. The history of the Canal Belt started at three most important canals: Herengracht, Prinsengracht and Keizersgracht. These are a part of the 17th century canal ring area which is included in the UNESCO World Heritage list. There are more than 1500 monumental buildings standing along the canals, including the famous Noorderkerk, Anne Frank House, Westerkerk and the Homomonument on the Prinsengracht. You will have the chance to visit them during your boat stops.

To get more information about the history of Amsterdam canals, visit the Het Grachtenhuis (The Museum of Canals) at Herengracht 386, which shows you how the Belt developed year after year.

Hotels near the Museum:

What’s the best time for a canal tour?

Spring and summer (April – September, to be more exact) are of course the most popular seasons for your Amsterdam visit. The weather is perfect not only for a boat tour, but also for a leisurely stroll along the canals or a peaceful walk in the park. Besides, there are some grand events taking place on water during this period.

For example, Open Garden Days is organized every year on the third weekend of June. A number of canal gardens open their gates to the public to reveal the lush greenery hidden behind the canal house walls. Pulitzer hotel’s gardens participate in the event too.

The King’s Day (formerly the Queen’s Day) is the national holiday celebrated on King’s birthday (April, 27th) with a number of festivities taking place on water.

To discover the liberal soul of Amsterdam, head to the city in the first weekend of August, when the Gay Pride Parade passes with a noisy fleet along the Prinsengracht and other canals. And of course, don’t miss the Grachtenfestival (the Canal Festival) - a must for every music fan, which takes place every August.

How do I organize a canal tour in Amsterdam?

Since a canal tour is a typical item in every sightseeing programme, there are numerous companies offering different tour programmes to Amsterdam guests. The best thing is that you can choose from a variety of themed tours, private or group tours and tours with an audioguide. At the same time, many excursions follow one and the same route. Boat stops are spread all over the town. Check out the one behind the Amsterdam Centraal if you don’t know what to start with. In the whole, we advise spending some time checking the most interesting offers.

Canal
Explore canals by night or by day, take a canal bus, a canal hopper or a canal bike, have a dinner or just a pizza on board and enjoy a romantic candlelight cruise.

Blue Boat
Blue Boat offers the 75-minute tour that starts at the Leidseplein. It’s very popular as it lasts a little bit longer than the other cruise offers. All in all, the company’s choice of tours promises much fun: Rockin Cruise & Dinner (with a stop at the Hard Rock Café), Getting Married on Board, Comedy Cruise, Discoboat, and of course standard cruises.

Amsterdam Jewel Cruises
These cruises are something for the most romantically inclined guests. Beautiful historic wooden boat with a limited number of seats, candlelight dinner and views on the beauties of Amsterdam is the choice for those who came here to celebrate their love holidays.

Along the canals with hotels
Of course, most of the hotels are ready to provide you with tickets to canal cruises. Some even have their small boat fleet or a boat landing dock (including the NH Barbizon Palace 5*). Ask the reception for details. The best offers we can suggest are:

Living by the canals…

Canal houses are an attraction not to be missed. The slim charming old buildings used to be the houses for the wealthy people. Nowadays many of them are occupied by museums and hotels. A stay at a canal house hotel is an experience you won’t forget. But note that most of such hotels are on the expensive side. 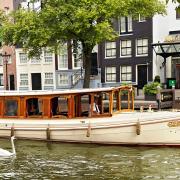 … Or on the canals

One of the most out-of-the-ordinary ways to spend several days in Amsterdam is to stay at a houseboat, or a hotelboat. Formerly just boats, they are now moored on water at the most charming corners of Amsterdam and serve as hotels. Most of them are well-equipped and offer basic facilities or even luxurious accommodation. A great choice of B&Bs and apartments is offered. But the best thing is that some houseboats stand on the historic Amsterdam canals, close to all the main attractions.