Best bars and pubs in Amsterdam

Best bars and pubs in Amsterdam

Amsterdam is the best destination for drinking we can think of. And it’s not only because of the merry city soul and its free-loving spirit. Those are Dutch gastronomic traditions, responsible attitude to the quality of drinks and of course international leadership in beer production that attracts those who appreciate a glass of good beer or jenever. The atmosphere of the place matters a lots, too. And in this respect, Amsterdam welcomes everyone, including tourists who want to learn more about traditional brown pubs, those arriving to the city for a pub crawl and of course true wine connoisseurs. See our list of the best pubs and bars in Amsterdam. 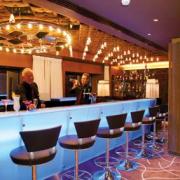 Twenty Third Bar. Hotel Okura 5*. Ferdinand Bolstraat 333
Okura is the dining destination that every gourmand knows about. The hotel’s choice of dining options includes 2 Michelin-starred restaurants (one, Ciel Bleu, was recently named the most hospitable restaurant of the Netherlands at the Horecava hotel and catering event) and the famous Twenty Third bar, located literally on the 23rd floor and boasting unbeaten views on Amsterdam skyline. Apart from that, you are offered the best selection of drinks and an unparallel high-end service. The hotel’s sommelier Noël Vanwittenbergh was chosen the Sommelier or the Year by Gault Millau 2014, so the best advice on wine selection is guaranteed too. But beware that the bar’s prices bite. Besides, the hotel is located outside the city centre in the south of Amsterdam.

Wynand Fockink. Pijlsteeg 31 & 43
Continuing our list of the best bars in Amsterdam, we cannot omit the famous historic Wynand Fockink distillery, hidden behind the prestigious NH Grand Hotel Krasnapolsky. This spirit and liquor distillery was opened in 1679, so you cannot but wonder at how long it has been there. The venue’s interiors are still breathing that 17th century atmosphere while the selection of antique drinks makes it a true liquor museum. No wonder that Wynand Fockink is often visited by celebrity guests (it’s list of famous visitors includes Churchill and Mark Chagall, among others). Take a guided tour around the place to add an educational part to your gastronomic trip.

What makes Wynand Fockink so special is:

Hotels near the Wynand Fockink:

Brouwerij’t IJ. Funenkade 7
A visit to the Brouwerij’t IJ, or the “windmill brewery”, must be in your schedule if you want to taste excellent home-made Dutch beers. Both the brewery’s location by the mill and its selection of beers that includes everything but standard international drinks you’re bored with are exceptional. Brown beers and white beers, dark-blonde beers, barley wines, even a limited-edition beer created together with chefs from Okura’s Ciel Bleu restaurant. Be careful with your orders as certain drinks might be quite strong. The good news is that the place is pretty budget-friendly, inviting everyone into a beer-tasting adventure.

The place is known for:

Belushi’s Bar at the Winston hotel/hostel. Warmoesstraat 129
Those who came to Amsterdam for a pub crawl, a stag party or clubbing will sooner or later end up at the Belushi’s Bar. The bar is very popular with locals and especially with tourists who prefer to stay at the colourful Winston hotel/hostel known for its unique urban design.  Indeed, the bar’s atmosphere is not for the effete ones. Noisy companies, punk-rock-alternative-electro music that is not less loud, lots of young people who came here for a time-out before they continue clubbing at the Winston’s nightclub next doors. For more relaxation, there are comfortable couches to rest your back on, a beer garden, a selection of inexpensive drinks and great snacks, including the “best burgers in town”, as said on the bar’s website.

Why you should visit Belushi’s Bar: 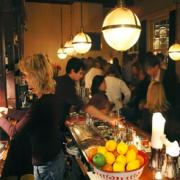 Café Tabac. Brouwersgracht 101
Every country has its typical drinking establishment. In the Netherlands it’s a brown cafe, a totally Dutch-looking place with brown wooden furniture (that’s what the name derives from), wallpapers that went yellow because of smoke, friendly atmosphere and a selection of beers and jenever. There are not that many truly historic brown cafes left in Amsterdam, but some establishments really dip you into the atmosphere of Dutch hospitality, and Café Tabac is one of those. The café occupies one of the coolest locations in the city, at the intersection of the Prinsengracht and the Brouwersgracht canals, thus offering unparalleled canal views and proximity to sights such as the Noordermarkt. Inside, the small cafe space with low ceilings is always crowded with people, who love to troop outside as well. Still, the café is really friendly and sociable.

The café’s main advantages are:

The Bulldog Palace. Leidseplein 15
If you know exactly what you came to Amsterdam for, and that is smoking, head nowhere but straight to one of the Bulldog coffee shops. The largest of those, the Bulldog Palace, is located on the Leidseplein. The Palace boasts the largest smoking room in Amsterdam, a selection of bars that serve international cocktails, plus VIP areas, karaoke, DJs, heated patio… In short, these guys do their best to make you feel comfortable and entertained while you taste the forbidden fruit (which is not forbidden in the Netherlands, as you know). Location on the Leidseplein, the most popular nightclub area of Amsterdam, allows you to continue partying at some of the best city nightclubs found around the corner. And in case you don’t want to travel far from your hostel to smoke weed, there is a coffee shop found in the Bulldog Hostel that’s situated in the Red Light District.

Several reasons to party at the Bulldog Palace:

Hotels close to the Bulldog Palace: