Amsterdam hotels for the art geeks

Amsterdam hotels for the art geeks

The artistic background of Amsterdam is not discovered in its museums and art galleries only. In fact, art is all around the city: on the streets and in cozy brown cafes, in parks, restaurants and even inside the hotels. So if you want to get acquainted with the artistic side of Amsterdam, you can start your journey into the world of classical painting, graffiti, sculpture, architecture, and design right at your place of accommodation. We suggest you our list of the most artistic hotels in Amsterdam.

Lloyd Hotel and Cultural Embassy 3*. From €119
Lloyd Hotel is the number one point to discover the cultural side of Amsterdam. There are many features that make this hotel a unique destination: historic site that once housed a prison, 1 to 5 star rooms, location in the Eastern Docklands area that boasts stunning architectural sights, curious room designs and of course a Cultural Embassy found on-site. The latter attracts the most artistically-inclined visitors with various art events held here daily: exhibitions, music events, readings, workshops dedicated to all artistic genres and much more. Continue your education at the hotel’s art library.

To sum it up, you should definitely visit Lloyd Hotel for: 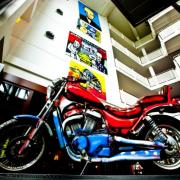 WestCord Art Hotel 4*. From €109
In contrast to the Lloyd, Art Hotel is dedicated to one personality only – Dutch artist Herman Brood, known for his colourful graffiti-style paintings. These works can be explored at the hotel’s art gallery as well as luxurious Herman Brood Art Suite with Jacuzzi. The hotel’s location in the Westerpark area is probably not the most central one. However, the area boasts one of the greatest examples of Amsterdam School architecture - the famous Het Schip, built in 1919. One of the best city spots to discover the cultural side of Amsterdam, the Westergasfabriek, is also found close to the hotel. Visit the Westergasfabriek for its bars, theatre, cinema and numerous music events and exhibitions held within its park.

Hotel Pulitzer 5*. From €332
Want something more upscale and refined that would quench your thirst for new discoveries? Head to Hotel Pulitzer. One of the most luxurious hotels in Amsterdam, it boasts unprecedented location within twenty five 17th and 18th century canal houses between the historic Prinsengracht and the Keizersgracht canals. But what might interest you most as a culture vulture is the hotel’s Art Gallery located within the Pulitzer’s beautiful gardens. Exhibitions change seasonally, so you will have to contact the hotel for more details about the current exhibition. The gallery is open 7 days a week and 24 hours a day.

The hotel’s most inspiring features are:

Hotel De L’Europe 5*. From €382
Another hotel that’s a favourite with stars and celebrities is De L’Europe, which pays tribute to classical art. The hotel complex includes two wings: one, Rondeel Building, combines timeless elegance, latest technology and Dutch Masters-inspired paintings. The second, Dutch Masters Wing, celebrates the talents of the best known Dutch Masters, displaying replicas of their paintings from the Rijksmuseum and magnified details of each work. So if you’re too lazy to visit the museum separately, a stay at the hotel could be an excuse. The Wing contains 23 suites that boast amenities for the tech-savvy guests such as iPod docking stations, motion-detecting floor lighting and bath mirrors with built-in televisions. 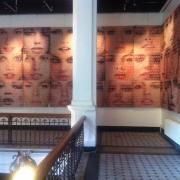 Hotel Arena 4*. From €173
With its quirky design and a nightclub on-site, Hotel Arena will probably attract the younger guests. Located in the Oosterpark area, the hotel compensates its remoteness from the city centre with its good transport links and its own cultural life concentrated inside the building. Those keen on everything artistic can visit one of the modern art exhibitions organized at the hotel regularly. The most sociable guests can hang out at the hotel’s nightclub or the terrace with DJ performances held here on week-days. If you prefer a more secluded pastime, head to the Oosterpark, one of the most beautiful parks in town, which contains a National Slavery Monument and a memorial to the filmmaker Theo van Gogh.

Things you must know about the hotel:

Grand Hotel Amrath 5*. From €250
Speaking of the Amsterdam School, the best way to get acquainted with this architectural style is to live at the Grand Hotel Amrath, located in the stunning Scheepvaarthuis, or the Shipping House. In fact, the building is considered to be the first example of the style, which traces its origins to the Expressionist movement. Brick walls, expressive forms, details of wrought iron, impressive woodwork and a slightly somber mood characterize this structure. The hotel is indeed an attraction, so be prepared for lots of tourists hanging around. We advise this hotel for those interested in history of architecture and couples who love to be surrounded with mysterious atmosphere.

Some facts about the hotel: 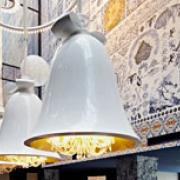 Andaz Amsterdam Prinsengracht 5*. From €354
Those interested in modern design will be totally blown away by this upscale Amsterdam hotel, located by the famous Prinsengracht canal. This hotel is actually one of the masterpieces by the internationally-renowned designer Marcel Wanders. Some call his creations weird, but most think they’re unique, stylish and bright. The hotel’s decor might be described as artistically Dutch and modern, with unique, colourful and futuristic features. And if you’re totally impressed by Wanders’ design, continue acquaintance with his works at the exhibition “Marcel Wanders: Pinned Up at the Stedelijk”, included in the hotel’s Art Package.

The most important hotel features: