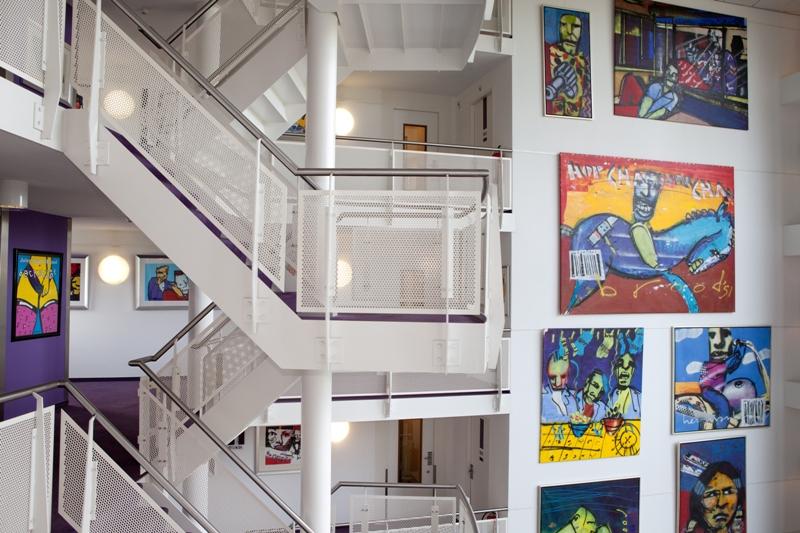 The Netherlands gave the world a plethora of masters of art, including the world-known Rembrandt and Van Gogh. But those are not only classical masterpieces of the “Dutch Golden Age” that every culture vulture must see. Young Dutch talents are born to the world every day, and the best place to get acquainted with what they do is indeed Amsterdam. If you look at the artistic map of the city, you’ll discover a great deal of museums and galleries displaying classical and modern art. And not only museums! In fact, your cultural enrichment can start right at the hotel. Learn more about the most important artistic centers in Amsterdam from our article.

Hunting for classical art
To get acquainted with classical Dutch art, head to the Museumplein (Museum Square), where the three most important city museums are located. The ones for those who want to see the masterpieces by Van Gogh, Rembrandt, Vermeer, Hals and Jan Steen are the Rijksmuseum and the Van Gogh Museum.

The Rijksmuseum
The year 2013 has seen the reopening of the Rijksmuseum after an extensive 10-year renovation. That’s why you can now again observe the 8.000 objects displayed at the museum, including paintings from the Dutch Golden Age by Rembrandt and his pupils, Jan Steen, Vermeer and others. Contemporary art exhibitions are held there too. Follow the museum’s exhibition schedule for more information.

The Van Gogh Museum
This museum is actually all about Van Gogh and his contemporaries. 200 paintings and 400 drawings by the master and works by the representatives of the Impressionist and post-impressionist movement (Paul Gauguin, Claude Monet, Paul Signac and others) are displayed at the Van Gogh museum.

Hotels next to the Museumplein:

Getting a close acquaintance with modern art
Modern art is everywhere in Amsterdam. It’s displayed in museums and galleries, hotels and even on streets (the annual Amsterdam Light Festival, for example). So if you’re keen on modern arts, we advice visiting some of the most popular art galleries in Amsterdam. The number of those is huge, so we really can’t list them all here. But we simply must name some of the most important ones.

Stedelijk Museum
It’s the museum dedicated to modern and contemporary art, also located on Museumplein. Explore the masterpieces by the giants of the 20th at the Stedelijk: Kandinsky, Chagall, Matisse, Warhol and many others. Works by the up-and-coming talents are also displayed at the museum.

The Cobra Museum of Modern Art
The Cobra is an avant-garde movement of the mid-20th century that’s currently widely talked about. The museum’s collection displays core works by the movement, which draws its name from the names of Copenhagen (Co), Brussels (Br) and Amsterdam (A).

Hotels close to the Cobra Museum:

An art gallery is the right place to immerse into the world of modern avant-garde art. A great deal of those is found almost in every area of Amsterdam, with the most important ones concentrated in the chic Jordaan district.  The following three galleries are included in The Guardian’s “Top 10 Independent Amsterdam Art Galleries” list.

Radar Architecture and Art. This gallery is perhaps one of the best spots to discover the street and underground avant-garde art, inspired by the city.

Galerie Fons Welters. Opened since 1988, the gallery is focused both on young talents and established artists, with works arranged in two different spaces.

KochxBos. Settled in a cozy street of the Jordaan district, inside this gallery is anything but conventional due to the choice of often controversial “lowbrow art”.

Hotels by the Jordaan area

Other artistic forms
To learn more about sculpture, photography, film and other categories of art, you can visit the themed museums and galleries:

ARCAM, Amsterdam Centre for Architecture. Exhibitions dedicated to architecture and architects, urban development and other subjects are organized within a futuristic building by the IJ.

Foam – Photography Museum Amsterdam. You’ll find all photography genres and works by the most prominent names and young talents at this museum.

An artistic experience without leaving your hotel
Got a packed schedule? Or want to see as much as you can in Amsterdam? Then why not start your acquaintance with the artistic soul of the city right at your hotel. There are several hotels in Amsterdam that boast permanent or rotating collections of art. They are: 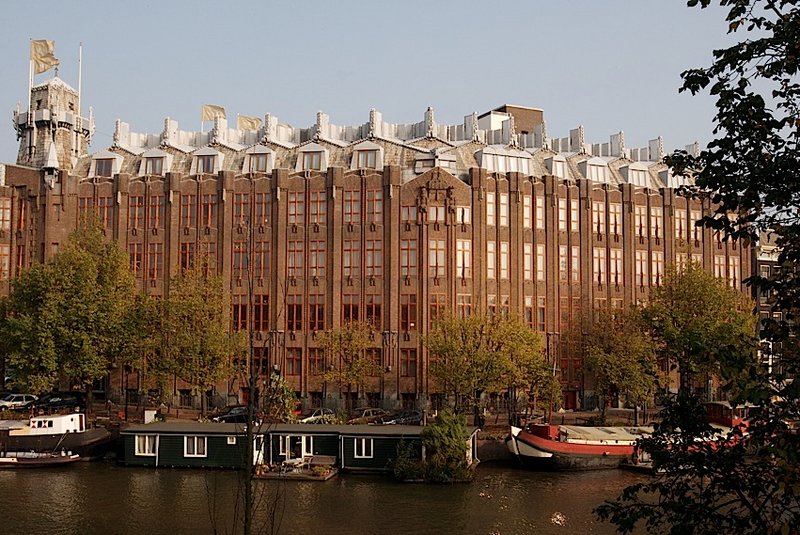 Lloyd Hotel and Cultural Embassy 3*. The hotel building accommodates a cultural centre, with art displays, readings, lectures, performances and other events organized here. Two more curious facts about the Lloyd: the building once hosted a prison, and it’s the only hotel in the city (or probably even the world) to offer rooms rated from 1 to 5 stars.

Hotel D L’Europe 5*. One of the most luxurious hotels in Amsterdam, it welcomes guests with the most refined taste to its Dutch Masters Wing. The Wing’s suites are decorated by the replicas of the Dutch Masters paintings from the Rijksmuseum.

Pulitzer 5*. Set within 25 historic canal houses between the Prinsengracht and the Keizersgracht, the hotel features an art gallery that is found in it beautiful gardens. The gallery’s opened 24 hours a day 7 days a week.

Westcord Art Hotel Amsterdam 4*. Located in the quieter Westerpark area, the hotel has its own gallery of works by the modern Dutch artist Herman Brood. The artist’s works also decorate the spacious Herman Brood Art Suite.

Artistic Hotel Packages
To organize your visit to museum/ art gallery in a more convenient way, you can book one of the art-themed packages available at many Amsterdam hotels. Some of the themed packages currently offered are: