As a capital of the Netherlands, the country with rich history which was once a major colonial empire and an important sea power, Amsterdam itself can boast many historic places and constructions. The centre of the city is filled with buildings that tell their own interesting stories. Nowadays many of these buildings are occupied by luxurious hotels, so if you want to feel yourself a part of history, you can stay at one of them. Let’s see what they are.

Sofitel Legend the Grand Amsterdam. Rates: from €300
Sofitel the Grand is one of the most iconic places to visit in Amsterdam for the history buffs. The hotel came a long way from a 15th century convent which with the arrival of Protestantism was converted into a hotel named “Princenhof” (which means “The Court of Princes”) and in this state it hosted many famous guests including the Princes of Orange William the Silent and the French Queen Maria de Medici. Then during the period from 1652 to 1655 it served as the City Hall and was the seat of the city government. In fact, it was not earlier than in 1992 that this building was occupied by a hotel. Indeed, Sofitel has a rich history which cannot be narrated in several sentences, so you can learn more during the tours organized by the hotel.

Grand Hotel Amrath Amsterdam. From €216
The imposing Grand Hotel Amrath has a long story to tell. A perfect example of the Amsterdam School of architecture, it was built in 1916 as an office for shipping companies and is known by the locals as the Scheepvaarthuis (“the Maritime House”). The impressive architecture of the building attracts many tourists, and for a good reason. Designed by the architect Johan van der May in cooperation with such prominent names as Piet Kramer, Michel de Klerk and Hildon Krop who created the carvings on the building’s facade, it combines many materials and textures including marble, brick, granite, slate and more. You can stay at this hotel to discover the beauties of this structure and impressive views over the canals and the IJ, or just drop in to have a dinner at its restaurant Seven Seas.

Lloyd Hotel and Cultural Embassy. From €95
Lloyd hotel’s history is not connected with shipping companies or royalties, however, it can also tell you some impressive and interesting stories. It all started in 1918 when the eclectic building was erected based on the Evert Breman’s plan. Originally commissioned by the Royal Holland Lloyd (KHL), it later served as a temporary accommodation for immigrants, then during the World War II as a refugee for the Jewish immigrants from Germany, then as a prison. From 1989 it housed studios for the artists, and this function it partly carries out till nowadays. Lloyd was turned into a hotel in 2004, and since then you can stay at its rooms that have a five star rating and enjoy the numerous cultural events organized here.

Hilton Amsterdam. From €189
Jonh’s and Yoko’s fans are familiar with this address. In 1969, during the Vietnam War, John Lennon and Yoko Ono held a series of Bed-Ins for Peace, a variant of sit-ins, but in bed, with which they protested against the war. Some of these bed-ins took place at the Amsterdam Hilton’s Presidential Suite (Room 902) during the period between March 25th and 31st. You can nowadays feel yourself a part of the pacifist movement and stay at John & Yoko’s Suite decorated with their memorabilia. But this will cost you no less than €1799.

The Conservatorium. From €268
Music fans will like the story told by this five-star hotel that is reflected in its name – “The Conservatorium”. Originally built by the architect Daniel Knuttel as the office for the Rijkspostspaarbank in the beginning of the 20th century, it was left by the bank in 1978 after it moved offices, to become the home for the Conservatorium in five year’s time. The latter moved to another building in 2008 and after the building was restored by the Italian designed Piero Lissoni, it became a home to the famous and highly praised hotel on the Museum Square. 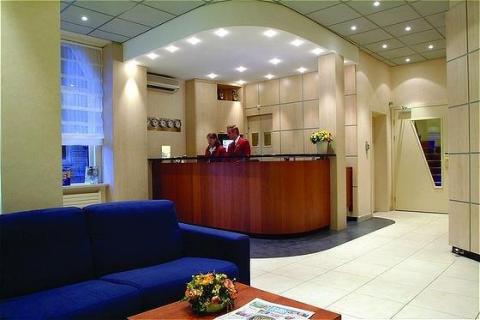 Hotel Amsterdam De Roode Leeuw. From €181
Hotel De Roode Leeuw has a long history that includes a series of expansions, redesigns, ownership changers. In fact, in 2011 the hotel celebrated its 100th anniversary. Designed by the architect Foeke Kuipers, it remembers the times of the World War II after which it was the “leave” center for the Canadian Army while the hotel’s terrace is known as one of the oldest of its types in the city. Despite its age, the hotel boasts recently renovated rooms, so you are welcomed to enjoy history and modernity all at once.

To sum it up, its hard to name all the historic hotels in Amsterdam, but we have mentioned the most prominent ones. Of course, the hotels that occupy historic buildings are mainly the high-class ones, so you will have to spend no less than €300 for your room at Sofitel or €216 for accommodation at the Amrath. For a cheaper variant, go to the Lloyd for €95. But if you do not want to waste extra money for the antiquity, you can stay at a more modern hotel and go to the historic one for an excursion.