Christmas tree at your doorsteps: hotels with the best Christmas views in Amsterdam

Christmas tree at your doorsteps: hotels with the best Christmas views in Amsterdam 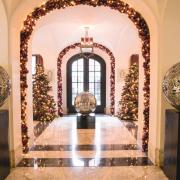 Many would agree that Christmas loses its magic without Christmas decorations. If you chose Amsterdam for your holiday trip, you will enjoy all the wizardry of the Christmas time. The city reveals its winter beauty through traditional Christmas attributes, including Christmas trees, ice skating rinks, markets, ice sculptures and projections decorating the city as part of the annual Light Festival. And you can enjoy this winter fairytale literally from your windows, especially if you choose one of the central Amsterdam hotels!

The best Christmas views from your hotel windows in Amsterdam

There are several things not to be missed in Amsterdam during the Christmas and New Year season. See what they are.

Dam Square, one of the most important attractions of Amsterdam, gets even more remarkable during the Christmas season. Every traveler that arrives to the city should go and see the Christmas tree that decorates the square in the first place. Traditionally brought from the German Ardennes, the 20-meter marvel is lit up with 40 thousand lights seen from a distance.

The Christmas tree and De Bijenkorf shopping mall that sits on the square form a bewitching lighting ensemble. At this holiday time De Bijenkorf boasts a beautiful façade illumination along with a 12-meter Christmas tree standing inside the building. Don’t miss the traditional holiday sale taking place at the mall December 26th 2013 – January 5th 2014.

Both of these sights can be enjoyed from the windows of NH Grand Hotel Krasnapolsky 5*, located directly on the Dam. The hotel’s stunning Winter Garden is a perfect spot for your Christmas festivities. Also take advantage of the Winter Special which includes up to 25% discounts off the hotel rates. Available for stays between December 15th 2013 and January 12th 2014.

Ice skating is a traditional winter entertainment. But what makes it so special when you’re in Amsterdam is the fact that you can skate right in the heart of the city, or even next to the famous Amsterdam museums.

There are traditionally two main ice skating rinks found in Amsterdam. The first is on Leidseplein, open mid-November – January 5th. This skating rink is surrounded by a Christmas market, so you can do some Christmas shopping as well.

Probably the best variant of accommodation close to this rink is Dikker & Thijs Fenice Hotel 4* located on the historic Prinsengracht canal. Quiet and homely atmosphere and beautiful canal views make this hotel a perfect choice for a romantic or a family trip.

Ice-skating rink on Museumplein has one great advantage: location next to the famous Rijksmuseum, the Van Gogh Museum, the Stedelijk Museum and the Diamong Museum. Enjoy skating for free and taste the delicious pancakes sold at the stalls during breaks. The rink is open for four months from December until March.

Museumplein is a perfect hotel location thanks to the proximity to cultural attractions. You’ve got rather a good choice of hotels here, including the stylish Park Hotel 4*, with comfortable split-level loft suites and a trendy MOMO restaurant.

You can’t imagine Christmas without traditional Christmas markets selling presents, themed souvenirs, Christmas trees and treats. Amsterdam is truly the market paradise since there is a big number of markets found throughout the city. Let’s name some of them.

The Albert Cuypmarkt is the most famous Amsterdam market that is open to the public throughout the year. There is also a traditional Christmas market held here on Sunday before Christmas (in 2013 it’s December 23rd).

Hotels by the Albert Cuypmarkt:

Bloemenmarkt (the floating Flower Market by the Singel) is the best place to buy a Christmas tree or simply get inspired by the Christmas atmosphere filling the air. The Christmas trees and other themed goodies are sold not only at the market, but also at the adjacent Christmas Palace, a special festive store.

Hotels by the Bloemenmarkt:

XMas Market at the Cultuurpark Westergasfabriek is a part of a series of Christmas markets dedicated to design, art, fashion, retro goods and much more. This is a wonderful place to shop for unusual Christmas presents. Unfortunately, it’s open for one day only - December 15th in 2013. Check the New Year’s Market on January 5th 2014 if you’re late for the first one. This spot is located outside the city centre, in the Westerpark area, so there aren’t many high-rate hotels to choose from.

Hotels close to the Cultuurpark Westergasfabriek:

Amsterdam Light Festival
The Amsterdam Light Festival is perhaps the most important winter event in Amsterdam that takes place December 6th 2013 - January 19th 2014. The city centre will be illuminated with a total of 30 light sculptures and projections. Besides, there will be themed canal tours and walking tours organized for visitors. You can find the complete list of activities at the Festival’s website. The coolest thing is that several artworks will be installed next to hotels. They are: 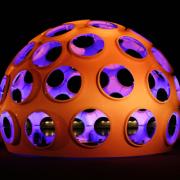 The Astera is a light flower that changes colors throughout the day and night and symbolizes the thistle – a plant that has adapted to the urban conditions. Discover this beautiful work from the windows of Doubletree by Hilton Amsterdam hotel 4*.

The Flying Dutchman is a projection that tells the popular story of the ghost ship. The projection will be displayed on a cylinder and thus will be well seen from different angles. Those staying at Sofitel Legend the Grand hotel 5* will be lucky to have this artwork under their windows.

The Fly’s Eye Dome is perhaps the focus of the Light Festival that will be seen at the second heart of the city (after the Dam) – the Central Station. This artwork is a reconstruction of the original 1981 Dome by the American architect R. Buckminster. Stay at one of the hotels by the Central Station to observe this work in a short walking distance. The hotels are